Millennial Slang for Voice Actors and Everyone Else

Coolio. Fly. Gnarly. What do these words all have in common? In their prime, they were once some of the most popular slang terms in America. However, these once commonly used words can now date someone to a specific decade in time. Societal changes and pop culture events impact our language, bringing new words and phrases into the mainstream vocabulary and phasing out old ones. As a voice over actor, understanding millennial slang and how these words change over time and geography can broaden your range of skills.

In a dialect-rich nation such as America, the popular slang words used today have roots in many different communities across many income levels. To better grasp those differences, how they may be an indicator of personal finance’s impact on speech, and to gauge which slang word is most widely used today, we delved into data from a survey of 672 millennials.

To what extent do factors such as age, location, and wealth impact our choice of words? Read on to find out.

Which Words Do We See Most? 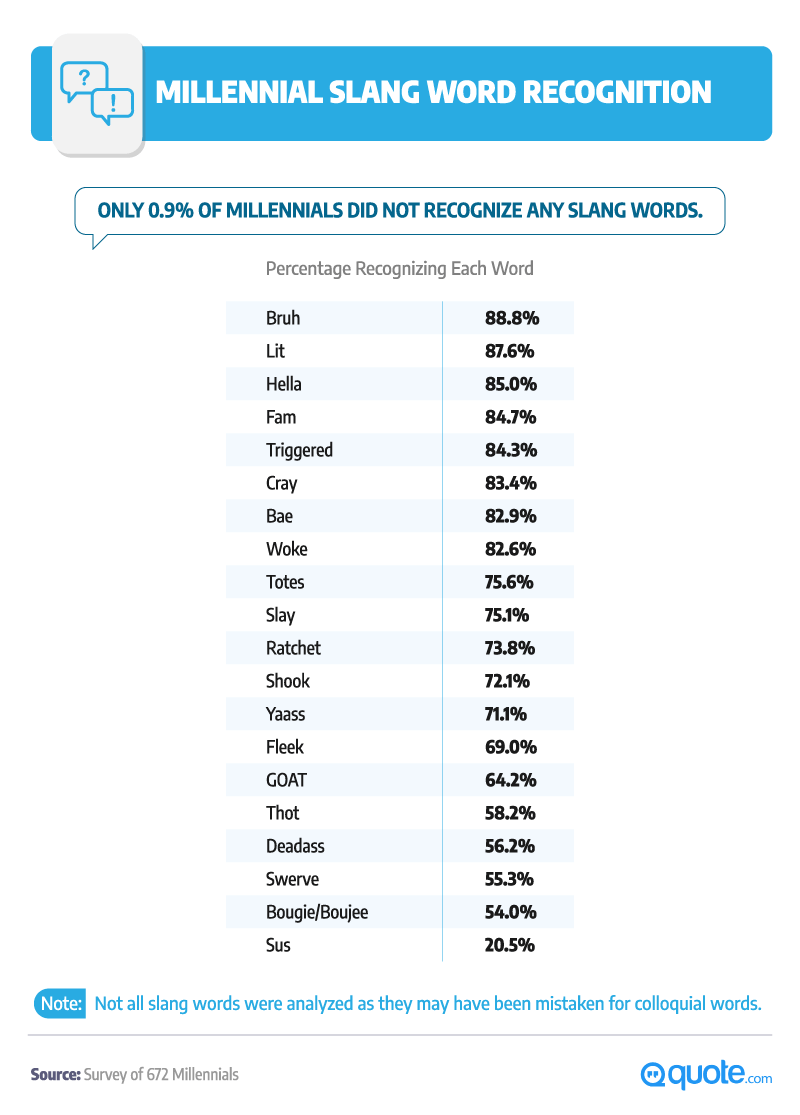 The vast majority of these widely known words are relatively new, coming into the mainstream as internet slang and Twitter memes.

Many of the words on this list have similar origin stories that can be found in the LGBTQ community, specifically among those of color and the world of drag. From the iconic movie “Paris Is Burning” to the trendsetting, drag-centric reality TV show “RuPaul’s Drag Race,” a distinct vocabulary has emerged that acts as a cultural identity. Words on this list such as “yaass,” “shook,” and “slay” owe their popularity to these innovative communities.

Nearly 80% of those surveyed did not recognize the word “sus,” making it the most unrecognized word on our list. The root “sus” is connected to words such as suspicious or suspect, and “sus” is slang for a questionable person, thing, or situation fitting that description. This word is rarely recognized compared to other slang terms, even in the millennial world.

Nearly everyone could identify at least one word, but outliers did exist. Less than 1% of respondents failed to identify a single word on the list, a small number of people who may not have as much exposure to social media where most of these terms are created or utilized.

Across different geographic groups, there is a dramatic difference in the words that people use. As previously mentioned, the internet is the home of much of our slang today. As of 2018, 89% of Americans use the internet, a figure that’s only been increasing across all age groups since the turn of the millennia. With overwhelming access to the platforms that new slang comes from, how can where we live impact what we say?

Some words are popular among high numbers of millennial respondents as well as across the nation, such is the case for both “triggered” and “woke.” On the other hand, words such as “lit” and “hella” show significant differences in regional popularity.

“Lit” is a word that has changed meaning over time and has recently been popularized by rap artists such as Travis Scott. The meaning of “lit” is now synonymous with intoxication, and musicians are name-dropping the term often, even as a watermark in their music. Respondents in the South preferred this word more than those on the West Coast who had more of a tendency to use “hella.”

Men and Women: What Do They Say? Although binary gender stereotyping should be avoided at all costs, there seem to be noticeable differences between men and women and the slang they adopt. Both genders find value in different words based on either their humor or merit.

“Triggered” is used by both genders the most, although many believe its popularity and misuse devalues the medical and psychological emergency that an actual “trigger” can elicit. For veterans or victims of violence, many things can “trigger” their PTSD or related symptoms, sending them into a breakdown or worse.

Among women, “yaass” is one of the most popular words used. Many attribute the rise of the term to Ilana Glazer’s character from “Broad City” or viral online videos. The real origins of “yaass” and other slang on this list – as touched on earlier – derives from the queer ball culture of the 1980s and the cultural contributions of “Paris Is Burning.”

Popular among men is the acronym “GOAT,” or “Greatest of All Time.” This slang term is primarily used in reference to athletes as people defend their all-time favorite players. While it is usually used to describe talented and noteworthy athletes, fans of the term think it is used too casually as it is intended to describe the “greatest” players. 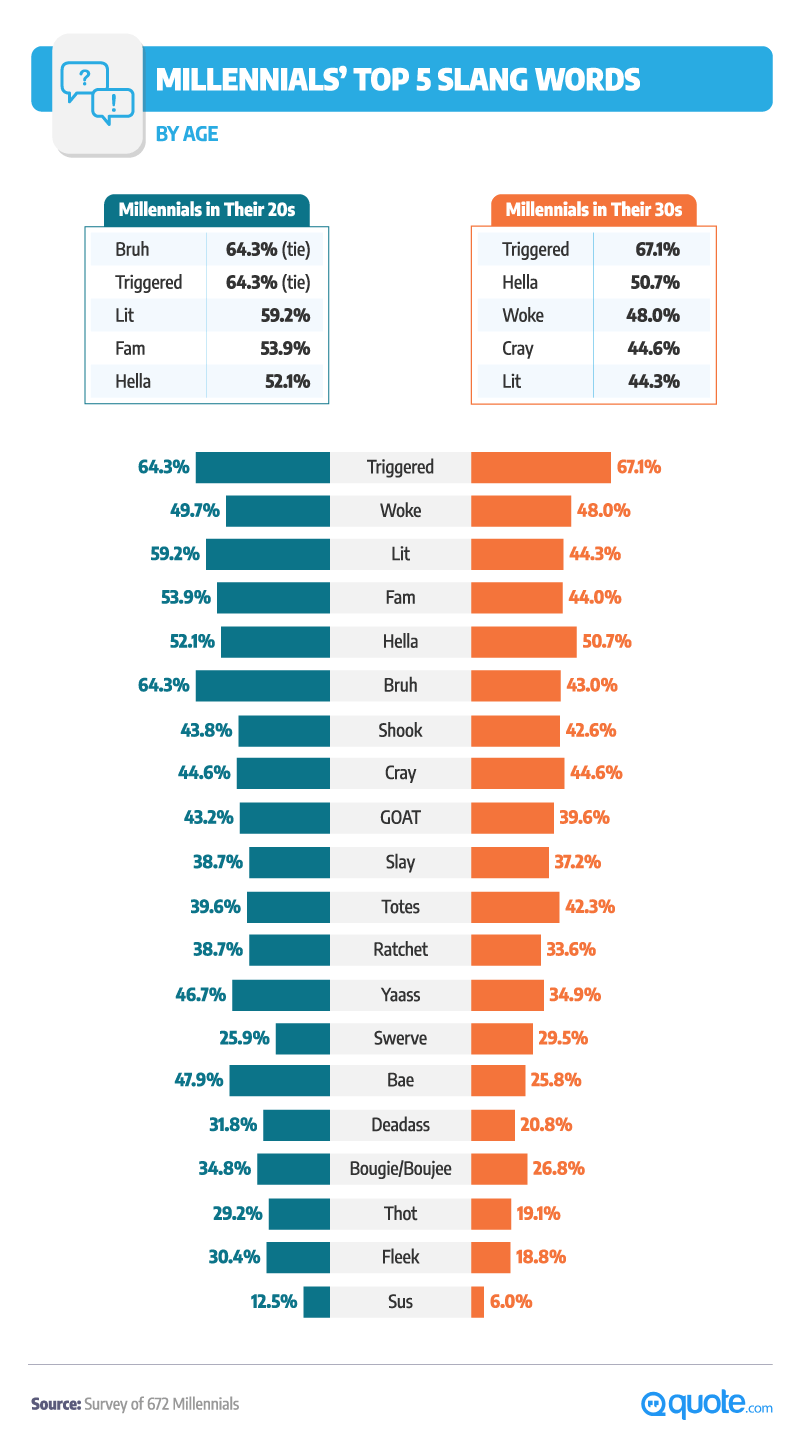 How we speak is constantly changing. With global connectivity at an all-time high, new trends spread like wildfire. Every few days, it seems a new meme goes viral, adding another term of value to our current vernacular.

Even within the same age demographic, things are slightly different. Answers from all millennial respondents were divided by people in their 20s and people in their 30s. Words such as “lit,” “hella,” and “triggered” – all very popular in our survey – are among both groups’ top five. “Bruh” is the most popular word among 20-somethings, while “woke” and “cray” still hold strong for those in their 30s.

The list of popular slang terms is changing daily, with a slew of new words being used by the younger generations. Analyzing this information is important to see how our language is adapting to the changing times.

East vs. West: An Ongoing Battle of Words When language trends develop, sometimes they stay within the confines of a particular region, city, country, or area. Occasionally, those words and their popularity travel far past their origins. Most of the slang on this list is more popular on the East Coast than the West Coast, implying that their slang word choices are more diverse than those on our Western shores.

Many of the same words are common between both East and West Coast respondents, speaking to the idea that slang is more universal than we think. Even “hella,” a word undeniably rooted in the West, lands as the fifth most popular slang term among East Coast respondents.

Although many of these slang words are common across the board, there are still some regional delights. “Deadass” and “sus” are both twice as likely to be used on the East Coast than the West Coast.

Language as a Wealth Indicator

Words used by the wealthy have a tendency to be in the context of luxurious and over-the-top things. Words such as “boujee” offer a specific mention of living lavishly, and it is no surprise that respondents believe using this word will make someone sound less poor. On the other side of the spectrum, the top word to make someone sound lower class is “ratchet.” It is mostly used to describe someone who is either acting promiscuous or wild and is predominantly aimed at women. Many criticize its use, comparing it to other problematic slang terms such as “ghetto” and noting the harmful effects these words can have on our culture.

Another word that can be poor-sounding to millennials – and degrading toward women – is “thot,” which stands for “that hoe over there.” It is easily one of the more controversial words on this list. Meme culture has attached the word “thot” to the image of a “knockoff” woman, someone who tries to act high class but has low-class tastes. Many view it as derogatory toward women and extremely dehumanizing. Regional terms also seem to be polarized by sounding rich or poor. The NYC-based term “deadass” is among those deemed sounding very low class. The myth that urban areas are poorer may contribute to these results.

Culture Spans the Ages – and Your Voice Over Performances

The origins of today’s popular slang words span across many decades, in many regions within communities of all demographics. Drag queen lingo has become one of the largest influencers on American slang, and internet meme culture seems to create new words and catchphrases by the hour. In this age of information sharing, we are exposed to much more slang than in years past.

Today, very few people refer to their apartment as their “pad,” and physical altercations rarely result in someone coming face to face with a “knuckle sandwich.” As time passes, trends come and go, and popular slang fades out of favor. Some slang may indicate a speaker’s wealth, while some words are interpreted as a sign of being lower class.

How We Collected Millennial Slang Data

We collected survey responses from 672 millennials from Amazon’s Mechanical Turk. 41.4% of participants were female, and 58.6% were male. Participants ranged in age from 20 to 38 with a mean of 29.3 and a standard deviation of 4.5. We excluded the words “extra,” “salty,” “thirsty,” and “wicked” from our data, as these words could have been recognized as colloquial words instead of slang. The maps used were generated using Google Trends data from July 17, 2013, to July 17, 2018.

While slang words fade in and out of popularity, there are some things that are always cool to do. This includes sharing your empathy and understanding for others through your voice over talents.

Voice Over Tips, Tricks And Articles

View More Designs
OUR SERVICES INCLUDE:

WEB DESIGN + VOICE OVER
Over 18 years of experience in Web Design and Voice Over!